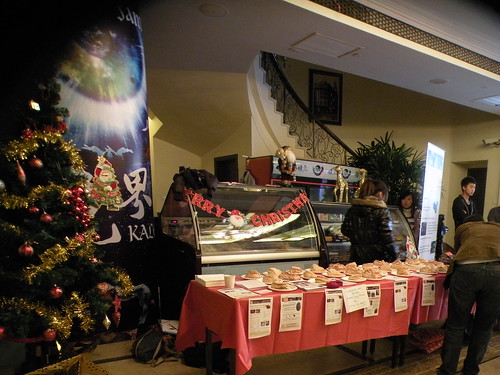 On Saturday, Dec 3rd, the French speaking network (Cercle Francophone) organized a Christmas family event, with a show followed by distribution of Christmas presents, drinks and food. Charity NGOs such as SYB, Enfants de Madaifu or Couleur de Chine were there!

Our teachers had baked about 300 very special apple turnovers… Indeed, they were baked with Madaifu’s apples, coming from Jiangsu… which is Zhang laoshi’s hometown! Zhang Zhenghai actually also was initially recommanded to SYB by the ONG Madaifu, and that’s what makes these apple turnovers highly symbolic of our partnership with Madaifu!

No need to precise that beyond their symbolic value, they were also absolutely delicious! It’s very hard to find apple turnovers in Shanghai; French expats were thrilled and asking for more 🙂

If you want to learn the recipe, we have scheduled special classes in January for “Galette des rois” and apple turnovers; check it out and register!

More pictures of this event on Flick’R

Your ticket for the: Cercle Francophone Christmas event